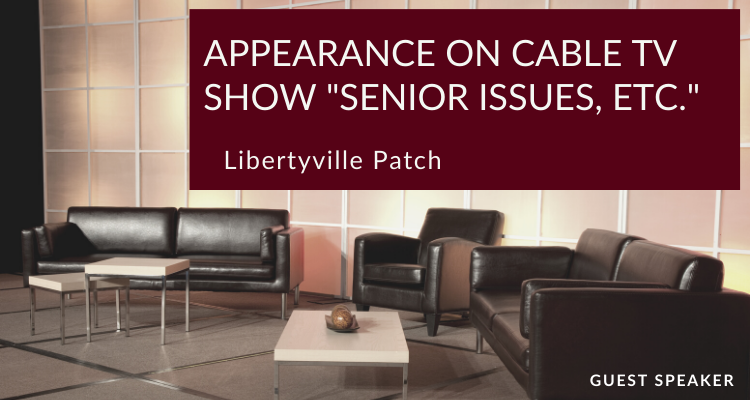 Attorney Bob Monahan talked about balancing his law practice and his radio show “Everyday Law” with Vita Verden on her television show, “Senior Issues, Etc.” Monahan, born in Chicago, was raised in Lake County and attended Carmel High School and graduated from the University of Chicago with his undergraduate degree. He attended law school at the University of Virginia and then practiced insurance defense law in New York City. Monahan and his young family moved to Lake County after 9 years in New York.  He started practicing personal injury law and has a law firm in Gurnee.

In an effort to reach out to the community, Monahan started giving lectures at local libraries on legal topics. His goal was to demystify the law for the community and he gave talks about small claims, home repair cases and wills and trusts. Monahan enjoyed these talks so much, he wanted to reach out to a wider community and started a radio show to expand his audience in June of 2015.

Monahan’s radio show is “Everyday Law” and runs twice a month on WRLR, 98.3 FM. Each show features a guest from the legal community speaking about their specialty. Lawyers, judges and politicians make up the bulk of the guests on the show. The most popular shows have been about wills and trusts and home repairs. Monahan feels that the popularity of the wills and trusts shows are because everyone needs a will or trust. The radio show about home repairs outlines important ways that homeowners can protect themselves when hiring a contractor to do work on their homes; including having a lawyer review a contract before signing and not paying the entire cost of the contract upfront. Lawyers can be guides in helping people through many of life’s issues. Monahan hopes that his show makes the law more understandable to the community and that a good lawyer can demystify the law.

Monahan truly enjoys both his law practice and his radio show. The radio show has been a creative outlet for him that has boosted his confidence as well as widened his outreach to the community. Monahan derives satisfaction in helping others; whether through his radio show or the individual clients of his law practice. His dream is to continue building his radio show and practicing law, perhaps one day having his children join him at his law firm.