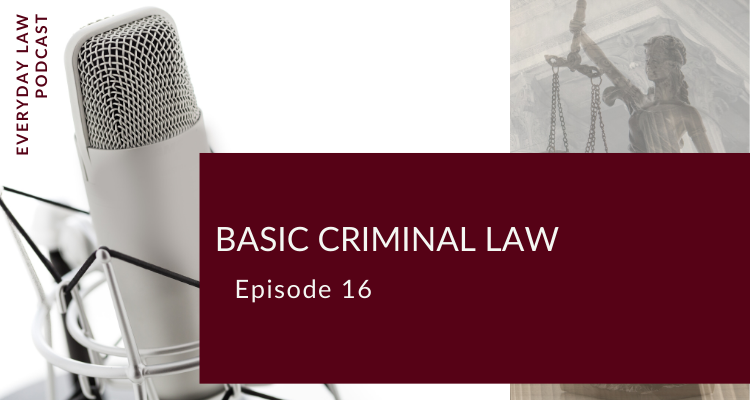 If you or a family member ever get caught in the criminal justice system, it can be extraordinarily stressful — to say the least! This episode of Everyday Law focuses on criminal defense, by walking a drug felony through the procedural steps of a criminal case: from the investigation, to the arrest, to the bail hearing, to the grand jury indictment, to the arraignment, to the pre-trial motions, and finally, to the trial itself!

My special guest to discuss Basic Criminal Law was Kevin P. Malia.  He is an expert criminal defense attorney with a practice — Malia & Rinehart — located in Waukegan, Illinois. He can be reached at (847) 249-2424 and at www.maliarinehart.com. Kevin’s practice exclusively deals with criminal law from traffic matters to serious felonies.

The criminal case starts with the arrest of the defendant; whether it is a traffic stop that may lead to drug charges or a more complicated matter with surveillance and an extensive investigation.  Depending on the type of case, a defendant may be simply issued a citation and released on his or her own recognizance, if it is a misdemeanor. If the case is more serious, and the defendant is charged with a felony, the accused will be taken to jail to await bond court. Bond Court is held every day. The job of the defense attorney is to argue that the defendant is not a flight risk and has ties to the community in an effort to obtain the defendant’s release at a reasonable bond amount. The defendant can be released if he or she can post 10% of the set bond amount ($1,000 for a $10,000 bond). The defendant is then free until the case is resolved as long as the defendant abides by any bond conditions.

Following the arrest and bond hearing, the case goes to the grand jury, or to a preliminary hearing, if the case is a felony. At this point, any evidence collected by the State from its investigation is presented to these forums to determine if there is probable cause that the defendant committed the crimes he accused.  A preliminary hearing is conducted before a judge and the defense as well as the State’s Attorney participates. A grand jury hearing is conducted by the State’s Attorney before a jury and there is no judge or defense participation. In Lake County, grand juries are used far more than a preliminary hearing.

Pre-trial motions are filed after the arraignment and before the trial. Some of the motions filed by a defense attorney may include a motion for a bill of particulars which may request the identity of a confidential informant. A motion to suppress evidence may be filed if evidence was obtained illegally such as by an illegal search and seizure. A defense attorney may also challenge a confession with a pretrial motion if the confession was involuntarily obtained.

The next step in a criminal case would be a trial. Criminal defendants have the right to a jury trial of their peers but may choose to have a bench trial where the judge hears the evidence and decides whether the defendant is found guilty. Kevin generally prefers a jury trial to a bench trial for his clients as he feels the odds are better for his client. As he explains, in a bench trial, the State has the burden of proving its case beyond a reasonable doubt to one person; the judge. However, in a jury trial, the State must prove its case to all twelve people of the jury as the decision must be unanimous.  Additionally, a jury trial affords the defense attorney and the State’s Attorney  the opportunity of voir dire, or the questioning of potential jurors and the ability to excuse a certain number of jurors based on their answers to questions asked of them. As Kevin has found, many people have preconceived ideas about the criminal justice system and people charged with criminal offenses. He wants jurors to have an open mind with regard to the criminal justice system, or at least the ability to set aside any preconceived ideas so that they may listen to the evidence more objectively.

Final Tip: Hire A Lawyer, Sooner Rather Than Later

Asked whether he had a legal tip for people with regard to criminal law; Kevin stated that people who get involved with the criminal justice system should have a lawyer, and if they don’t have a lawyer, get a lawyer as soon as possible.  As with so many difficult matters, it pays to take the initiative and start with legal representation sooner, rather than later.