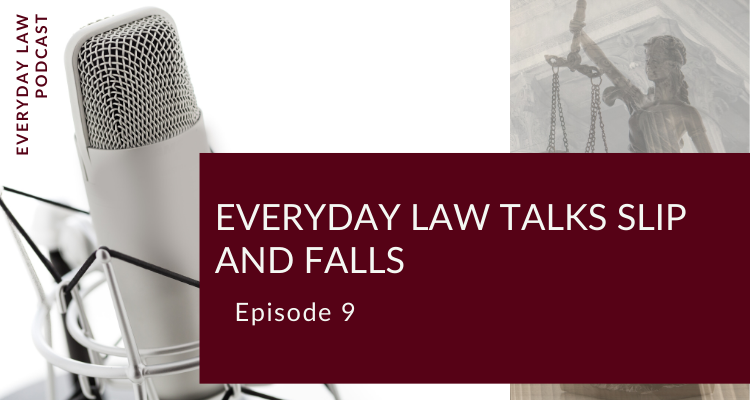 In this episode, Everyday Law talks slip and fall accidents, including why these cases are challenging for injured victims, the “Goldilocks defense,” the “notice defense,” and natural versus unnatural accumulations of snow and ice, and how homeowners can take steps to protect themselves from claims.

For starters, these claims are considered by many to be the stuff of slapstick comedy.

You can almost hear the laugh-track on America’s Funniest Home videos playing after it happens to you. And then there’s the other thing. A slip has happened to almost everyone at some point or another, right? It most likely did not result in any injury, or only a slight injury — mostly to your pride. The result is that people don’t consider slip and fall claims legitimate. In fact, during the 2004 vice-presidential debates, I remember hearing Cheney call John Edwards a “slip and fall” lawyer. It was not a compliment.

So the first challenge in bringing a claim like this at all is to get people to take it seriously.

Another difficulty a slip and fall claimant faces is that the hazard or defect he tripped on has to be “just right,” that is, the claimant can fall victim to a kind of blame-the-victim “Goldilocks Defense.” In other words, if the defect is too small, the defense will be that it is “de minimis.” It is too small to be a real hazard. But, on the other hand, if the defect is too large, the defense can argue that it is so large that it is “open and obvious.” It is so clearly a hazard that the claimant should have seen it, and avoided it. So the claimant must thread the needle exactly right — with the defect being neither too small to be a hazard, nor too large such that he should have seen it coming.

Another good defense to a slip and fall claim is called the “notice” defense. In other words, the property owner is only at fault if he knew about the defect, or the defect existed for so long that he should have known about it, or he actually created the defect. This can be hard to prove. The reason for this rule is that conditions that just arose, for which the landowner did not have time to fix, should not be his fault. So the victim/claimant must prove that the landlord knew, or should have known of the defect, for long enough the he could have fixed it; but didn’t.

There is more to a snow or ice slip than just notice. There is also the question of whether the patch of snow or ice is a “natural” or “unnatural accumulation.” With snow and ice, in the jurisdiction of Illinois, it is often considered an act of God, so a “natural accumulation” leaves no liability on the part of the property owner. Liability is found only if it is an “unnatural accumulation.” That would mean that you cleared snow off your driveway, for example, but did it so haphazardly, that you piled it up where it was sure to melt and cause slick ice on the sidewalk. Shopping malls sometimes do this in their parking lots, where there are huge mounds of snow. Or another example might be a leaky gutter, causing ice to form on the sidewalk underneath the gutters or stairs, and ice forms there. The lesson is that if you do clean up the snow or ice, do it right, or you could be liable for someone slipping and falling.

The Focus of Judgment — Blaming the Injured Victim

When bringing a claim based on a slip and fall, it is very hard for the injured party’s attorney to keep the “focus of judgement” on the property owner. Jurors will go out of their way to blame the plaintiff in these situations. They are very different from car accident cases. In those, what the defendant did wrong is generally clear and close in time — either the at-fault driver was talking on a cell phone, or texting, or simply speeding. But in a slip and fall case, what the defendant did wrong is not so commonly known, and it is often remote in time — the property owner hadn’t been maintaining the property or inspecting it; the owner had not been properly patrolling the aisle; or never took steps over time to fix a piece of mis-leveled pavement. It can be hard in that kind of case to bring home to the jury that the defendant caused the accident.

The Role of Codes and Regulations in Slip and Fall Cases

Because what the defendant did wrong in a slip and fall case is often so remote in time, and not familiar, or common, knowledge, the importance of codes and regulations cannot be over-emphasized. Safety codes spell out the obligations of a landlord to keep his or her property well-maintained, and a plaintiff’s attorney can often point to these codes as laws that the defendant has broken, which endangered the well-being of not only the plaintiff but of anyone who was on the premises. Accordingly, it is incumbent on property owners to know the relevant safety codes that govern their property and to follow them to protect entrants from danger.