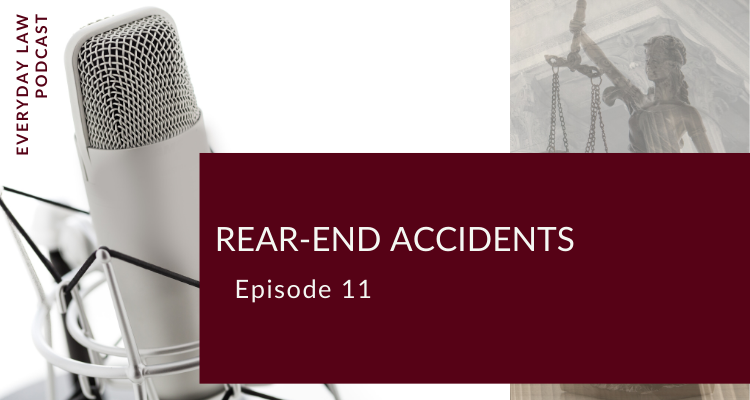 In our podcast, Maria and I discussed rear-end accidents, using Maria’s recent accident as our point of departure. While fault is generally clear in these cases, due to the failure to follow the “assured clear distance ahead rule,” the defense generally attempts to show that the injured party is not that badly injured, and that the whiplash that occurred is not a serious injury.

Maria Monahan recently was involved in a rear-end accident on a busy street in Waukegan, Illinois. She was stopped in a long line of stop and go traffic and had stopped just before the intersection of a side street so as not to block it. She was hit from behind and initially felt the shock of being hit, and then was concerned that her back could be injured. However, after pulling over to a side street along with the other driver, she discovered she was physically fine. The other driver, a young girl, was visibly upset. As both cars did not appear to be damaged and neither driver hurt, Maria didn’t feel it was worth the effort to contact the police as she did not want the young girl to be ticketed.

Fault in a rear-end accident is usually clear-cut. Drivers are supposed to abide by the “Assured Clear Distance Ahead” rule. This means that all drivers are supposed to drive such that there is enough distance between them and the car ahead so they have enough time to stop should the car in front stop. However it appears from an observation of heavy traffic, that few drivers know that rule or choose to follow it. Additionally, particularly in stop and go traffic, accidents may be caused by inattentive drivers. This can be seen at a traffic stoplight with any number of drivers focused on their devices rather than the road.

The usual injury caused by a rear-end accident is whiplash. This is an injury to the neck at the spinal column caused by the impact of being hit with a jerk to the head and the resulting back and forth movement. Whiplash can be a difficult injury to deal with as the injury may resolve within a reasonable period of time, but other times, it may be more lasting and more difficult to resolve.

Whiplash is a soft tissue injury. Tissue, muscle, nerves and tendons can be stretched out in ways they are not meant to move. Such soft tissue injuries will not show up on diagnostic tests such as X-rays, though they may appear on MRIs. The spinal column consists of bone or vertebrate, soft or spongy intervertebral discs between the bone and a myelin sheath that surrounds the discs. When trauma such as whiplash occurs, the spine bends in an unnatural and forceful way, and the myelin sheath can rip causing the spongy discs to impinge on the spinal cord. Symptoms of tingling or numb extremities can indicate such an injury.

Another difficulty in any kind of auto accident with a soft tissue injury is that a person involved in an accident may not feel any symptoms immediately after the accident due to shock and adrenaline pumping. Such injuries may show up a day or two later.

Where should someone go to seek a diagnosis after they are involved in a rear-end accident? As mentioned in earlier podcasts regarding auto accidents, insurance companies like to see a regular course of treatment. This includes a visit to the ER, if needed, a visit to a primary care doctor and subsequently a referral to physical therapy, a specialist such as an orthopedist or an order for additional tests such as an MRI. As a side note, licensed physical therapists carry more weight and authority with insurance companies and the public at large, as opposed to chiropractors for treatment.

It is important to note that there are other stumbling blocks to recovery for a rear-end accident. Defenses to such collisions can include a sudden failure of brakes or headlights as well as limited visibility. A plaintiff can be contributorily negligent in a rear-end accident by stopping his car in a dangerous spot as it puts him at risk by making his car less visible.