Need a good lawyer for a slip and fall claim?

These kinds of cases have challenges of their own. First of all, they can be devastating. They can cause broken limbs, hip fractures, surgical interventions, and worse.

Moreover, these claims are not easy claims to win. This may come as a surprise. The refrain goes: “What’s the big deal? I fell on his property. Isn’t he just automatically responsible?” 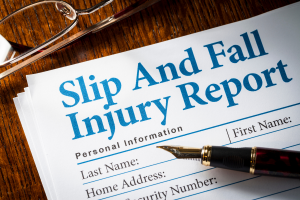 In any case, the law only holds people accountable for things that they did wrong. There is such a thing as an “accident” where someone gets hurt, and no one is responsible. In order to be liable, the property owner has to have done something wrong, and this often depends upon the technical/legal concept of “notice” in slip and fall claims.

To prove negligence, you must identify several factors:

Many hazards can result in an accident, including:

An Experienced Slip and Fall Attorney You Can Depend On

The best way to describe how “notice” relates to fault is that it is not always enough that there is some defect on the property that caused an injury. The property owner has to either know about it or it has to have been there long enough such that the property owner “should have known” about it.

For example, if you enter a dark staircase in an apartment building and fall down the stairs because the light is out, then it all depends upon how long the light has been out. If the light had just gone out, it might be just an “accident.” It could not have been prevented. No one did anything wrong.

On the other hand, if the light had been out for weeks, and people had complained about it, so that the landlord knew all about it, but ignored the complaints and chose to do nothing, then the claim is stronger because the landlord is at fault. He is supposed to fix his property. He knew there was a problem. He chose not to fix it. So it was not an accident — it is a good claim.

And this is just one of many problems that crop up in “slip and fall” claims. A good lawyer is absolutely necessary in these because there are so many traps for the unwary.